There is a misconception that all Australian Shepherds have short bobbed tails, and there are questions over the likelihood of a short tail in an Aussiedoodle. But, the natural tail length of this dog varies. So, do Aussiedoodle have naturally long tails, and does this mean that most are docked?

Do Aussiedoodles have docked tails? Most Aussiedoodles will have shorter tails. This could be due to natural shortness from their hereditary line or artificial shortness through docking. If you buy a puppy that isn’t docked, you have the choice whether they have the procedure or keep their tail.

The Tails of Australian Shepherds Can Vary Depending on Their Linage

There is some understandable confusion as to why some Aussiedoodles have no tails and others do.

With many dog cross-breeds, the answer comes down to the breeder’s choice to dock the tail just after birth. However, there are some Aussiedoodles born with a very short tail. This means that if you buy a puppy or adopt a dog with a short tail, it may have always been that way.

The Australian Shephard has developed over generations to have a shorter tail as breeders selected animals that naturally had this quality.

The idea was that a shorter tail was better for the dog in its work on ranches. It wouldn’t get in the way, and the dog could be healthier and more efficient.

As more naturally short-tailed dogs were bred together, they created new generations with this trait. So, you can find a dog with these naturally cropped tails.

When it comes to crossing an Australian Shephard with a Poodle, there is a chance that the offspring could develop the same short tail if their Aussie parent has it.

When it comes to second-generations dogs, the odds depend on the parentage. A short-tailed Aussiedoodle with a short-tailed Australian Shephard increases the odds significantly as there is a stronger leaning towards the Aussie side.

What About Miniature Aussiedoodles?

The same should be true of the miniature Aussiedoodle.

If you have a Miniature Poodle with the genes for a long tail and a long-tailed Australian Shephard, your dog will have a longer tail at birth.

If the Aussie parent has the shorter tail, this could be passed down to the Mini Aussiedoodle offspring.

Some breeders will dock the tails of Aussiedoodles from birth.

There is still the chance that you will find Aussiedoodle pups for sale where the tail was docked instead. A breeder may dock the tails of those with longer ones so that all the puppies are the same and have the same qualities. Many people expect the Aussiedoodle to have this shorter tail, making more sense for the breeder to provide this service instead of leaving the cost up to the new owner.

This could be a medical procedure at a veterinary clinic, or it could be an at-home procedure where they tie off the tail at the desired length until it falls off.

Tail docking in Aussiedoodles is common because it is seen as being advantageous for the dog.

Some owners do this because they want the animal as a working dog.

This takes us back to that idea of the tail getting in the way while working. People say that the dog should have a shorter tail to minimize any risk of damage.

Critics would argue that this removes an integral part of the dog’s anatomy as the tail is also helpful for balance and communication.

That is why many people that opt for tail docking don’t create a small stump. Instead, they remove the tail up to what they call “poodle length”.

But, this in itself is misleading as the Poodle’s natural tail length is long and possibly the reason why the Aussiedoodle is considered for docking in the first place.

Some say that tail docking in Aussiedoodles is vital because the long-hair of their tail can get messy with fecal matter, and it benefits the animal to remove that risk.

Again, critics would argue that a messy dog’s risk is actual for any long-haired breed, including retrievers who typically keep their tails.

This may be more of a desirable trait for owners who don’t want to spend so much time grooming their dogs.

A docked tail is also the breed standard for the Australian Shepherd and Poodle.

The AKC has set standards on what certain breeds should look like when they are shown. They prefer to see a docked tail with both of these breeds to reflect the breed’s working heritage and because they feel it looks better.

So, it is common for breeders to dock the tails of these purebred dogs automatically. This instinct remains with their offspring, even though you can’t show a hybrid dog.

Can You Keep The Long Tail on An Australian Shepherd Poodle Cross?

Owners that buy Aussiedoodles that have full tails have a choice over what to do next. If you feel that docking is the best course of action, you can do so via your vet.

But, if you would prefer to see your dog with its full tail, there is nothing to stop that either.

Many other countries made docking illegal, and you can see what their dogs look like with a total Shepherd’s tail.

In short, it isn’t uncommon for a breeder to dock the tail of the Aussiedoodle, even Mini Aussiedoodles, to get a “desirable” length. But, there are also cases where these dogs are born with short tails. You can have a dog from this stock; a dog docked at birth, a dog docked later in life, or one with a full tail. 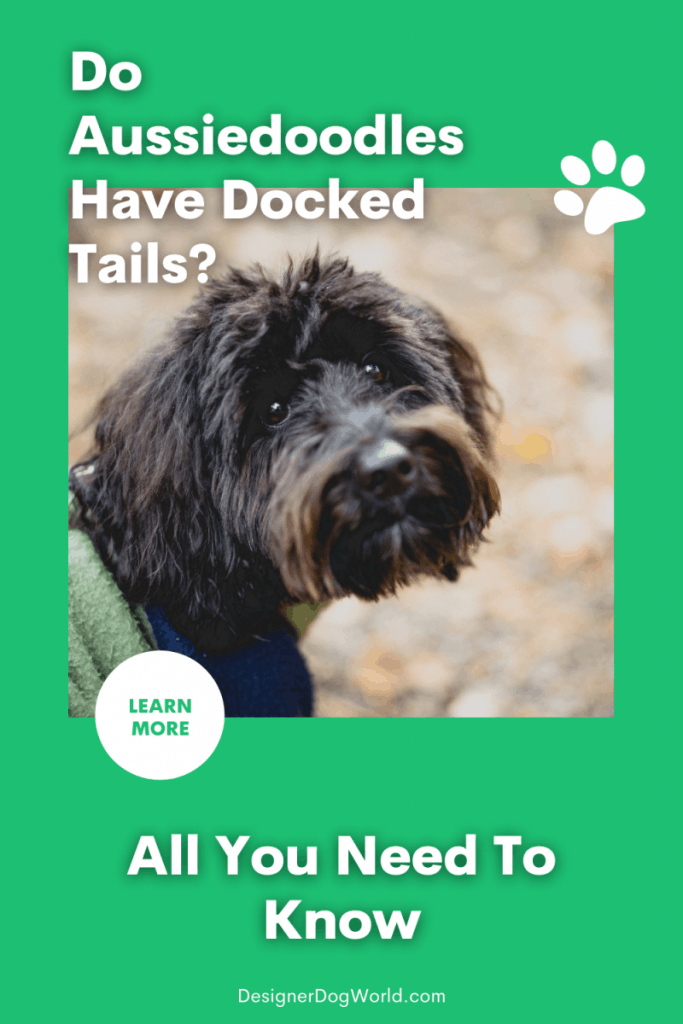 link to Can Dogs Get Piercings or Tattoos? [Vets Say Hold On!]

Many people love getting their bodies modified in the form of tattoos and piercings, but what about people who want to do the same to their pets? Yes, some people give their dogs some ink or...

Are you looking for a designer dog to bring home? Eskipoos are some of the most adorable designer dogs, ideal for families with kids and other pets. But, You need to equip yourself with...